The most beautiful walk so far, Jeff and I went to Sauvie Island and walked along the sandy beaches of the Columbia River for a few miles.

Just behind me is one of the many barges we watched go by, this one was carrying grain.  I waved at a couple of boats and barges just to see if anyone was watching, was waved back at twice.

Isn’t this fun?  just under the water are these shelves, which extend a way and then drop off…the water in this river is dredged to keep it around 45 feet deep for the commercial traffic, like the barges that come thru from Portland to Astoria on a continual basis. 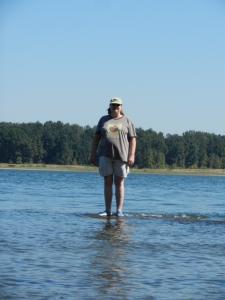 Mom called me while I was walking (I was wondering if the cell phone would have reception out there) and asked for a nice picture of me, or my face, so Jeff obliged her.  Actually he took all the pix with his camera, so I have none of him this time.

Did I mention what a beautiful day it was?  The only mar on the landscape was the piles of trash around each of the porta-potties lining the road along the beach access.  We stopped and paid $7.00 for a parking permit and than Jeff wondered what they did with that money, since they clearly don’t provide any trash cans.

On the drive back out, we wondered at how we’d made it thru our childhoods without corn mazes or pumpkin patches,  which, clearly, some farms on the island are gearing up for.  Its big business out there, and a big draw, which is good for the local economy.  We continued on past the bridge and drove around the other side of the island just because we hadn’t seen it before.

It was a nice day for a walk on the beach and a drive around the island.  If you are local and haven’t been there, I say, give it a go.  I hear the Corn Maze is pretty Amazing!

Posted in On the homefront